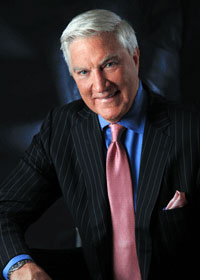 Tom McMillen served three terms in the US House, representing Maryland’s Fourth Congressional District. He is chairman of the National Foundation on Fitness, Sports and Nutrition and former co-chairman of the President’s Council on Physical Fitness and Sports. A member of the US Olympic basketball team in 1972, he also played professional basketball for eleven years (for the New York Knicks, the Atlantic Hawks, and the Washington Bullets). As a Rhodes Scholar at Oxford University, he received a master’s degree in Politics, Philosophy and Economics, and he holds a degree in chemistry from the University of Maryland. He is the author of Out of Bounds, which examines the influence of sports on ethics, and he served on the Knight Foundation’s Commission on Intercollegiate Athletics investigating abuses within college sports. Read More

The National Foundation on Fitness, Sports and Nutrition

The National Foundation on Fitness, Sports and Nutrition was established by Act of Congress and signed into law by President Barack Obama on December 22, 2010. The Foundation was created to support and supplement the mission of the President’s Council on Physical Fitness, Sports and Nutrition. The Foundation encourages and promotes private sector support to help all Americans get active, play sports, and eat healthier. Learn More

Out of Bounds is a hard-hitting analysis of how the influence of money on sports is corrupting sports on all levels, especially at our institutions of higher education. The book provides a clear-eyed look at the problems with the mindset that values “sports above all,” a mindset that has led to events such as the recent scandal at Penn State. Read More

Behind the Curtain in Our Nation’s Capital: What’s Really Going Wrong in Our Political System.

Obesity: a “Huge” American Problem and Why We Must Deal with the Issue NOW.

The Pillars of Success: Three Essential Principles for Anyone Hoping to Succeed.

Looking Back… The Career of Maryland’s Tom McMillen

Tom McMillen says he has “multiple career disorder.” That’s one way to look at it. Others might note that his basketball All-America-Rhodes Scholar-United States Congressman skill-set comprises a pretty rare and impressive resume. And that doesn’t even begin to tell the whole story. Read More
Tom McMillen